With the Covid-19 crisis deepening, the clock-ticking countdown to the uncertainty of Brexit, thousands of jobs under threat nationwide, and our personal finances stretched even further as Christmas suddenly looms, it is little surprise that police are being called to deal with soaring numbers of incidents involving people suffering severe mental health issues.

Under the Mental Health Act, police can attend a situation because someone suffering a mental health emergency may pose a risk to themselves or to others.

The number of such 999 callouts in England has already risen by 41% over the past five years, with figures continuing to soar. And it isn’t just the regular police having to shoulder this increased workload; British Transport Police incident numbers are rising dramatically too.

Mental health experts say the increase highlights the erosion of services for people with conditions such as depression and schizophrenia.

Andy Bell, deputy chief executive of the Centre for Mental Health think-tank, said, “Use of the Mental Health Act has grown year-on-year for a decade, as support to prevent crises has reduced due to funding restrictions in local services.”

Tina Marshall, the UK country manager for Visiba, the digital healthcare platform provider, said that with police and secondary healthcare under enormous strain, “a mental health crisis is fast approaching.”

Back in 2018, Her Majesty’s Inspectorate of Constabulary expressed “grave concerns” that police officers were being called out to far more mental health related incidents than they should, blaming a “broken mental health system,” and added that the problem constituted “a national crisis.”

And in October the Royal College of Psychiatrists revealed that almost two-fifths of people waiting for NHS mental health support end up seeking help from other agencies like the emergency services or crisis teams and helplines.

Mental health bodies believe there is not enough care available for people in the early stages of mental health issues, which can deteriorate suddenly and lead to police becoming involved. Yet any swift improvement in the situation looks unlikely.

Andy Bell added, “With up to 10 million people needing help for their mental health as a consequence of the pandemic, we must ensure resources are available locally to keep people well where possible.”

According to surveys back at the start of 2020, many Brits felt a sense of optimism as we moved into a new decade and a new chapter in the nation’s history.

And even after Coronavirus struck for the first time, there remained a fair level of buoyancy, perhaps accompanied by the belief that life would soon return to normal.

It didn’t work out that way, and in our recent survey, with the second wave of Coronavirus and the new lifestyle restrictions biting hard, more than 60% of us now say we are feeling more stressed and anxious as a result of the pandemic.

At 32%, financial or job security worries are the most common factors pushing our stress and anxiety levels, with lockdown measure restrictions (24%) and feelings of alienation and loneliness (16%) also figuring significantly.

Interestingly, 19% of us blame digital and online “overload” as the chief cause of our increased stress and anxiety – that one looks unlikely to be going away any time soon! 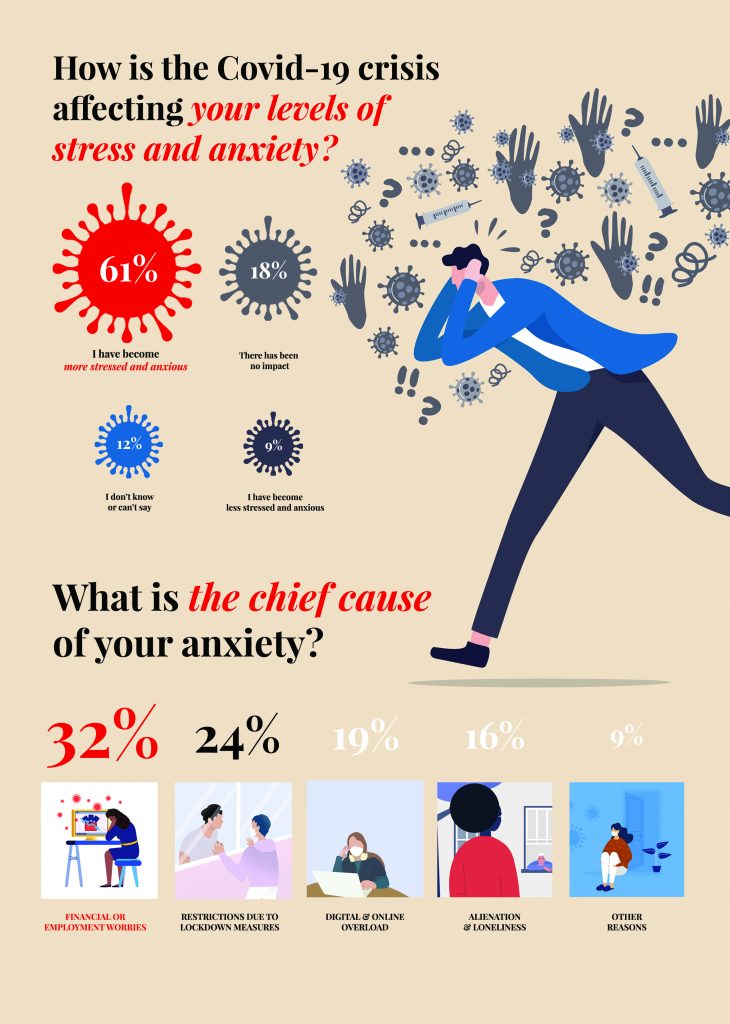