The court of a certain opinion 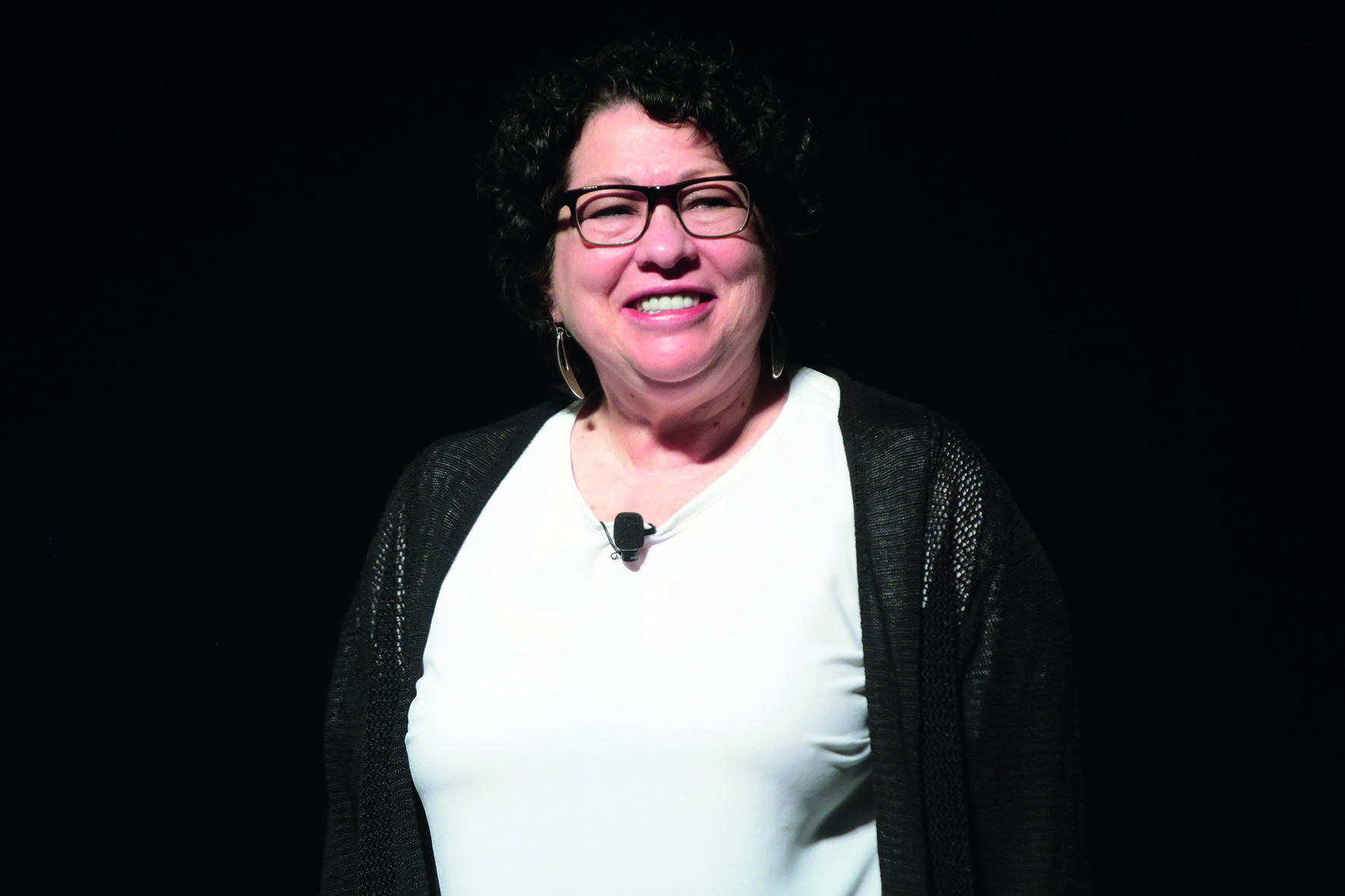 “Will this institution survive the stench that this creates in the public perception that the constitution and its reading are just political acts? I don’t see how it is possible.”

That was Justice Sonia Sotomayor, one of three liberals on the US Supreme Court, during a case last year that anti-abortion activists have been dreaming about for nearly half a century. Finally, a credible chance to overturn Roe v Wade, the 1973 landmark decision that protects abortion rights.

The possibility arises out of the deeply conservative state of Mississippi, and few across America have any doubt how the conservative-majority Court will decide, delivering a long-sought victory for evangelicals and other Christians who believe abortion violates Biblical teachings and is equivalent to murder. And so – tick, tick, boom. Another political earthquake to rattle the deeply divided country and leave liberals flummoxed yet again on an issue that a majority of Americans support (if the health of the mother is considered in the question) but conservatives in strategic places don’t.

The near certainty of striking down Roe reflects the makeup of the court. Six of the nine justices are conservatives appointed by Republican presidents; the three liberals were appointed by Democrats. A decision in the Mississippi case is expected this month or next; for the American majority that supports Roe, the stench Sotomayor suggested may be palpable.

What did she mean, exactly? Among America’s three branches of government, only the judicial was meant to be immune to political influence. Not that it always has been in practice; justices and federal court judges, after all, are appointed by presidents, and presidents have agendas. But never has a neon line between politics and the current Court burned so brightly. Rather than a public majority that favours reproductive freedom, this case will reflect the judgment of five, maybe all six conservatives – five of them Catholic and the last three appointed by former President Donald Trump, who made overturning Roe a prerequisite for their selection.

No other president had ever made such a naked political promise, and the fruits of it emerged last month. In an unprecedented breach of Court protocol, a leaked draft of a majority opinion in the Mississippi case asserted that Roe must fall. It was written by Justice Samuel Alito and affirmed by four other conservatives, Trump’s three among them – Neil Gorsuch, Brett Kavanaugh and Amy Coney Barrett. Alito based his reasoning on “no express reference” to abortion rights in the Constitution and the rationale that abortion is not “deeply rooted in the Nation’s history and traditions.” He argued, “We hold that Roe and Casey must be overruled,” citing a second case that affirmed Roe in 1992. Never mind that the Constitution was written in 1787 and signed by 39 white men (no women), nor that Roe has stood for five decades. How long is history, anyway?

Roe provides a constitutional right to abortion before the foetus can survive on its own, about 22 weeks. If struck down, abortion rights devolve to each state, and more than half, all led by Republicans, have passed a patchwork of measures with shorter limits – Mississippi at fifteen weeks – even though most are facing legal challenges. Other states have crafted “trigger laws” that would apply once Roe is gone.

One state found a workaround. A new Texas law set the cut-off at the moment cardiac activity is detected, around six weeks. To skirt Roe, it removed the state as the law’s enforcer, eliminating any governmental entity to sue. Instead, the law empowers private citizens to sue anyone who “aids or abets” an abortion and the state agrees to pay $10,000 to any plaintiff who prevails. A dozen other Republican-led states are considering similar laws. Oklahoma went full-on illogical, passing the nation’s most restrictive abortion law yet, banning it after fertilisation – which eliminates the idea of an abortion altogether. About the only area of disagreement among opponents of abortion is whether exceptions should be made if the life of the mother is at risk, or if the pregnancy has resulted from rape or incest. Most states would allow the first, as Roe does, but not the other two.

Chief Justice John Roberts is especially sensitive to public perceptions that the Court has lost its independence. He is widely assumed to favour exceptions. After all, he did not sign Alito’s Mississippi draft, which does not mention exceptions. But with four other conservatives concurring, a majority appears willing to overturn Roe. As a measure of how polarised the Court has become in 49 years, Roe was decided by a seven-two vote, with five justices appointed by Republican presidents in the majority. One Democrat dissented.

So how did we get here? In his single term, Trump filled his three Supreme Court seats with three anti-Roe nominees, two with help from Senate Republican Leader, Mitch McConnell.

The first: McConnell found a precedent used just once since the 1880s: when one party controls the Senate (in this instance, Republicans) it doesn’t have to confirm a nominee from a president of the other party within the final year of the president’s term. In this case, Justice Antonin Scalia, a conservative icon, died when Democrat Barack Obama had eleven months left in his second term. McConnell denied Merrick Garland, Obama’s pick, the customary Senate hearing, let alone a confirmation vote. That left the seat open for Gorsuch.

The second: Two years later, Justice Anthony Kennedy, a conservative but frequent swing voter, retired. Trump filled his seat with Kavanaugh, whose confirmation survived accusations of sexual misconduct when he was in college. In their confirmation hearings, both he and Gorsuch described Roe as “settled law”, leading to charges they misled senators after their names appeared in the Alito draft.

The third: This was a gut punch to the abortion rights community. Justice Ruth Bader Ginsberg, perhaps the most liberal member of the Court, died six weeks before Trump lost to Joe Biden in 2020. Enter McConnell. This time, with both a Republican Senate and President, he rammed through confirmation of Barrett, a devout Catholic, giving conservatives a Roe-proof, six-three majority.

Both sides view the leaked draft opinion as prophecy. If you absent the Court’s usual protocols of secret deliberations, when justices revise language and maybe even change minds before announcing a final vote, the draft signalled the outcome, putting the country on edge. The Department of Homeland Security has already issued warnings of potential threats and violence from the losing side.

With Roe gone, state lawmakers will need to codify the ruling – including what penalties may await women or medical personnel involved in post-viability abortions – and which of the exceptions might apply. They will have to decide whether to punish a woman who travels out of state for an abortion or buys contraception online. They will also have to decide whether to provide additional social services for impoverished women with an unwanted newborn or for young teenagers ill-prepared to raise a child. And how will they regard a miscarriage? What if doctors discover signs of fetal abnormality that would lead to a compromised life?

One question not expected to get much consideration: What about the man who caused the pregnancy?

Proponents of abortion rights have other concerns. Alito’s draft asserted that overturning Roe has no bearing on other contentious social issues. But there’s no guarantee. Liberals fear losing hard-earned rights to same-sex marriage, interracial marriage, contraception, affirmative action and other rights implicit in the Constitution’s “equal protection” clause. The Alito opinion has also plunged abortion into the calculus of the November Congressional elections. For many voters, particularly suburban white women who may support Republicans but feel strongly about preserving reproductive rights, abortion may be more important than the leading issues they criticise Democrats for – inflation, fuel costs and covid. That worries Republicans. Democrats are hoping the abortion issue will energise their base and force Republicans to explain why they are taking away a right most Americans favour keeping.

Roberts called the leak “absolutely appalling”, a view echoed last month by Clarence Thomas, a conservative and the longest-serving justice, who told a judicial conference: “We can’t be an institution that can be bullied into giving you just the outcomes you want.” While Thomas did not specifically mention the leak, he seemed an ironic defender of the Court against charges of political influence. In January, the justices ruled eight-one against Trump in his effort to withhold documents related to the US Capitol insurrection last year, an event that led to his second impeachment for inciting it.

The vote drew raised eyebrows following reports a few months ago that, in the days after Biden beat Trump, Thomas’s wife Virginia, a staunch conservative activist, sent dozens of text messages to Trump’s chief of staff, urging him to spare no effort to overturn the election and keep Trump in office. The lone dissenter in the vote was her husband.

Awash in guns and death

In the span of ten days last month, two eighteen-year-olds became the latest reminders of the outsized role of guns in American life. One shot ten shoppers dead in a Buffalo, New York supermarket. The other killed nineteen young children and two teachers at an Uvalde, Texas elementary school. They were the 211th and 212th mass shootings out of a total of 230 recorded in the five months between January and May this year, according to The Gun Violence Archive – a non-profit group that tracks such things. A mass shooting is defined as a minimum of four victims either injured or killed in a single incident. The Texas killings were the worst since a twenty-year-old Connecticut man killed twenty children and six staff at Sandy Hook Elementary school in 2012.

Horrified at such bloodshed? Don’t be. Americans love guns. We have 330 million people who own 400 million guns. We also have the Second Amendment to the Constitution, which guarantees the right to have one. Or dozens. So what if it was ratified in 1791 when single-shot muskets were the weapon of the day? The same freedom applies to the military-style weapons of war that are often used in our modern-day killing sprees.

Lawmakers have been loath to do anything, citing “gun rights” and all that. Sure, they send “thoughts and prayers” to the surviving families. But no new amendments. No tighter restrictions on gun ownership. Once nothing changed after Sandy Hook, it was hard to imagine they thought anything more important than protecting gun rights.

Between 2014 and 2020, the last year for which the Archive has data, the number of mass shootings increased by 78 per cent, from 269 to 611. And more may be coming. The US Supreme Court will rule shortly on a case that could end New York State’s restrictions on the right to carry a concealed weapon. The potential result? More guns on the street, more states following New York and, for sure, more “thoughts and prayers”.