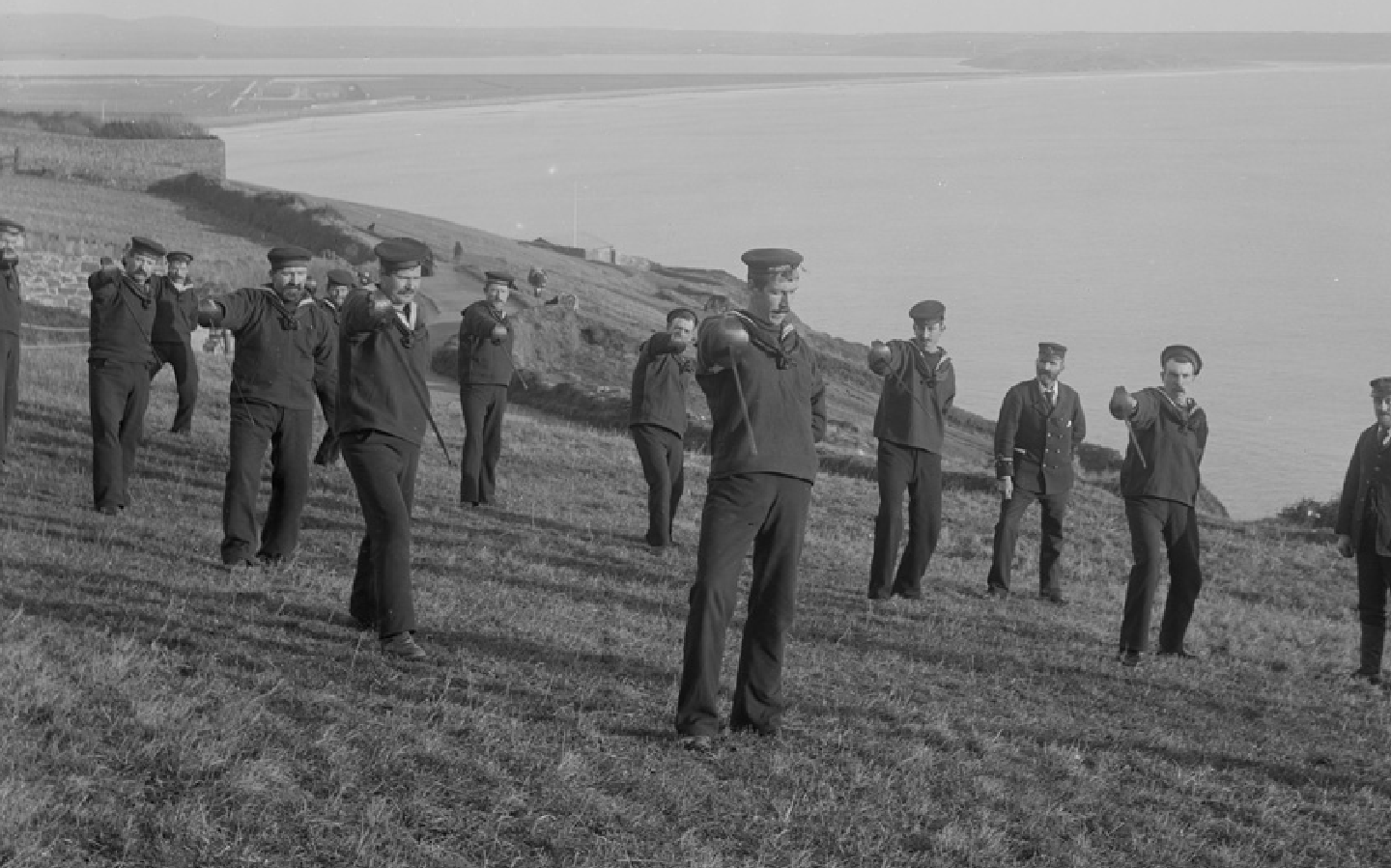 Members of The Royal Reserve Training at Tramore, County Waterford, C. 1905. Photo: National Library Of Ireland On The Commons

If you google “de-cluttering” you’ll find what a fashionable mental health benefit it is said to be. There are moments, however, when clutter comes good. It was a previously overlooked suitcase in the far reaches of the attic that led me to the discovery of my father’s 1939 diary, a typescript, some photos and a bundle of dry-looking records from his time in the WWII navy. He was 21 and had joined an organisation called the RNVSR in the summer before the war because he knew he had to do something, however much he didn’t want to.

The RNVSR, I discovered, was the Royal Naval Volunteer Supplementary Reserve which had been established late in 1936. By then Britain was involved in a new navy race with Germany and there was widespread re-arming across Europe and in Japan and America. Unprecedented amounts of money had been voted to modernise the British fleet but there was nothing to provide it with additional officers.

In those years between the wars, yachting had become increasingly popular. Not the splendid regattas for Kings and Kaisers but small-boat sailing for the middle as well as the upper classes. Even a dispossessed tenant farmer’s son like my father, then completing his articles as a clerk on the Birmingham stock exchange, could be a sailing club member and go blowing down the River Avon to Tewkesbury. When he went home to Suffolk he could explore local rivers and sleep out under the stars in his own open boat. Magazines like Yachting Monthly celebrated the romance of the sea as well as offering copious advice and instruction and stoking the burgeoning commercial market. When the Admiralty published a request for “Gentlemen interested in Yachting” to volunteer for service in the event of an Emergency they were overwhelmed by the response.

The RNVSR was the “Yachtsmen’s Reserve”. When war did come its members were commissioned as officers in the RNVR, usually starting as “probationary, temporary, acting sub-lieutenants”, however grand their pre-war civilian status. I wondered whether these amateur sailors would bring particular skills or attitudes to the conflict, as Erskine Childers had predicted when he published The Riddle of the Sands in 1903. His hero, Arthur Davies, bursts out “There must be hundreds of chaps like me […] who know our coasts like a book. Shoals, creeks, tides, rocks; there’s nothing in it. It’s only practice. They ought to make some use of us as a naval reserve.”

Yachtsmen had not, in general, joined the official RNVR, also established in 1903. Its degree of regimentation and the stipulation for regular attendance threatened to take precious time away from sailing. Between 1936-1939, however, almost 2000 amateur sailors put their names forward for the RNVSR. Their applications hadn’t all been processed by the time war was declared and initially the Admiralty seemed somewhat hesitant about the most effective ways to use them. Eager yachtsmen waited for letters that didn’t come. They wondered whether they should have joined the territorials.

A few, with very specific skills, like my father who had been accepted into the paymaster branch due to his poor eyesight, were called up even before war was declared. He was sent to Scotland to join a submarine depot ship where he worked as a cipher officer. Yachting Monthly editor Maurice Griffiths was posted to HMS Vernon, the Navy’s torpedo and mines centre, where his yacht surveyor’s knowledge and general technical acumen could be put immediate use. Minelaying and minesweeping were unrelenting, essential duties from day one. But could the author of the small boat classic, The Magic of the Swatchways, have imagined that within a year he would be defusing huge, unexploded sea-mines dropped by parachute on London? A surprising number of the yachtsmen volunteers would find themselves winning George Medals and George Crosses in this way.

Harbour defence, patrolling, minesweeping were routine postings. Other RNVSR volunteers, like Peter Scott who had represented Great Britain in the 1936 Olympics, were harder to place. Scott, with his social standing as the son of Scott of the Antarctic and his growing international reputation as an ornithologist and artist, expected to serve at sea on a destroyer. Initially the concept of volunteers being given responsibility for anything more than a requisitioned trawler was anathema to the regular Navy. It took Scott until the summer of 1940 to achieve his aim – and then he found himself unexpectedly afflicted by sickness and fear. Leaping ashore with a revolver at St-Valery-sur-Caux to try to evacuate the 51st Highland Division after the fall of France was a significant step in Scott’s progress to becoming a brave and competent First Lieutenant. He used his artist’s eye to devise a new system of destroyer camouflage and by the early months of 1942 began lobbying for a command.

Attitudes to the amateur sailors were changing fast: some, like Nicholas Monsarrat, were officers on corvettes, escorting convoys across the Cruel Sea; Penguin’s pre-war production manager, Edward Young, had recently escaped death on a submarine; yachtsmen were serving in naval intelligence and in weapons development. The availability of commanding officer positions on destroyers was, however, limited. Scott was persuaded to take on one of the Navy’s new steam gunboats and become part of Coastal Forces. In 1945 he would become its first historian.
Somehow, between the wars, the Admiralty had forgotten the need for small, fast-attack boats – “mosquitos with stings” as Childers had called them.

There were six brought back from the Mediterranean to Britain in 1939, compared with the 600 that had been part of the fighting force in 1918. Germany meanwhile had developed its own Schnellboote. Once the Netherlands, Belgium and France were occupied, these well-armed, diesel-engined, metal-hulled E-boats could cross the southern North Sea or the English Channel in a few hours to lay mines or ambush coastal convoys. Britain responded hurriedly with wooden, petrol-engined motor launches, gun- and torpedo-boats, quick and cheap to assemble, horribly vulnerable to fight with. As the regular RN officers were needed elsewhere these Coastal Force craft were commanded almost exclusively by the RNVR and particularly the former yachtsmen. Innumerable small, fierce, battles were fought by brave individualists in these “Spitfires of the Sea”.

They also participated in set-piece missions organised by Combined Operations under Lord Louis Mountbatten. The carnage could be spectacular. Operation Chariot on 28 March 1942 was a longer-distance raid from Falmouth to attack the Normandy dock in Saint Nazaire. Fifteen Coastal Force motor launches, one motor torpedo boat and a motor gun boat set out. Only three made it back. The most recent study (by Giles Whittell) describes Saint Nazaire as a “valley of death” into which the planners knowingly sent their wooden boats, their crews and commandos. Political gain, as Churchill sought to appease Stalin and impress Roosevelt, was brought at the cost of 62% casualties (killed, wounded or captured).

Worse still was Operation Jubilee, a few months later on 19 August, 1942. Peter Scott was there in his newly-built steam gunboat. My father’s older brother, Jack, was there too, commanding a rescue motor launch. His task was picking downed airmen from the sea while being strafed by the German fighter planes. RML 513 returned to England with 209 holes in her wooden hull and a piece of shrapnel through Jack’s neck which left him in pain for the rest of his life. 68% of the Canadian forces put ashore that day were casualties. Once again, the crucial question is why? Its most recent chronicler, Patrick Bishop, likens it to Passchendaele.

In the clutter of my house I have inherited a copy of The Dieppe Raid (1975) by Canadian author John Mellor onto which Uncle Jack has written his own abrasive criticisms of the staff officers – particularly Mountbatten, Montgomery and the Canadian General Roberts. I also have Peter Scott’s The Battle of the Narrow Seas, which includes first-hand accounts from participants in all the major Coastal Forces encounters, including the Saint Nazaire and Dieppe Raids. It troubles me that this is not included in the most recent studies. Yachting is no longer a major interest for many people and the Navy has lost its hold on our imagination. Recently-written histories seem land-biased to me, though I wonder whether living with the clutter of long dead relatives has skewed my point of view? Or has it helped me tell a different truth?

Julia Jones is a writer, dementia campaigner, classic yacht owner and lifelong lover of the River Deben. Her latest book, “Uncommon Courage: the Yachtsmen Volunteers of WWII” is published by Adlard Coles 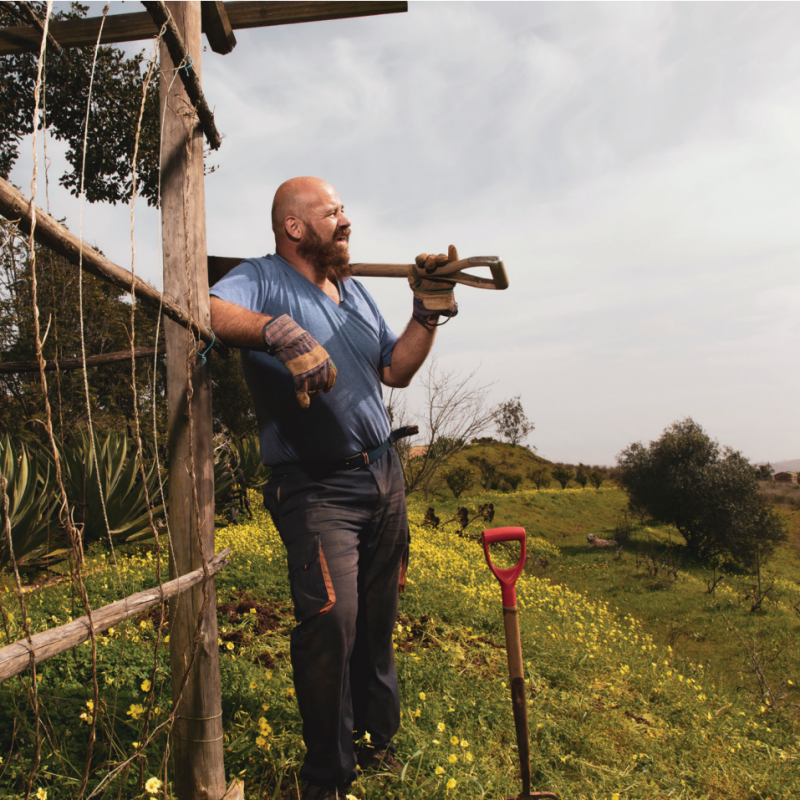