We went to see the new Bond film. It felt radical to present this swaggering, borderline psychopathic character with the bald fact that sex has consequences; somehow seeing him in a committed long-term relationship made the kisses more erotic. This occasioned a trip through Daniel Craig’s back catalogue. I watched Enduring Love. Made in 2004, Craig has his same neat, trim body, his arms bulging in beige shirts. But he also has rectangular glasses with unflatteringly small lenses, and baggy boot-cut jeans. The film portrays Jed, an evangelical who develops an obsession with Craig’s character John, much more homoerotically (and homophobically) than I remember Ian McEwan’s original novel doing. Jed’s love for John blurs the lines between romantic love and Christian agape. Jed stalks John. It takes John a remarkably long time to clock this is happening. Enduring Love reminded me of The Talented Mr. Ripley, where homosexuality is rolled into Ripley’s psychopathy, almost incidental in his desire to become Dickie Greenleaf and, like him, to own fine things and move among the upper classes without being born into them. This is homosexuality as narcissism, materialism, fraudulence, lifestyle choice in the purest sense. Jed’s homosexuality is coded through his self-presentation: the pale blonde fringe through which he looks up at John bashfully, the too-small T-shirts from which we get flashes of midriff, the soft voice. John, with his bad clothes and jaw built like a tank, is the victim, the film tells us, of a mentally deranged man who wants to lure him away from productive heterosexuality. This is the homophobic rhetoric of the late twentieth century writ large (that gay people would seek to “convert” and “recruit” children
and straight people; that queerness is a predatory cult). A botched idea.

One of the scenes of Enduring Love is filmed in the London Review of Books (LRB) shop. I was pleased with myself for recognising it, even in a tight shot, by the type of the sign on the shelf, “Biography”. I love recognising specific locations on screen, more so with London than any other city. I didn’t grow up here, so it makes me feel my right to be here is validated. But I can’t say whether or not I love London. I bear it an ambivalence. Most days it makes me feel harried and frayed, but it can also give moments of pure joy: cycling across the river, Hampstead Heath, the LRB. I’ve subscribed to the paper ever since I moved here, I pretty much always have a copy on me: in the tube, in the bath, at the Ladies’ Pond – I used to fall asleep in the sun, topless, with it over my face – on the top deck of buses as they crash through the plane trees like boats.

I was lucky to complete an editor-in-residence placement with them this past month, as a Ledbury Critic. From the windows of their offices on Little Russell St, I could see the old New York Times London bureau, where I interned for six months straight out of university. I was so painfully green then. They paid me a minimal wage and I lived in a family friend’s spare room. What I remember is my stamina. I look back amazed at the pace I used to keep. Now I cycle around and the city is overlaid with visions of former selves: ones which make me wince or of which I feel fond. There is the café, now a McDonalds, where I began a friendship that has now come to an end; this the bus stop at which I stood in tears after a party where a boy I liked locked his bedroom door with someone else inside it with him; here is the letter box where I dropped my postal vote, for which election I can’t now recall. This used to be a community theatre
where we went to see that horrendous talk on men and feminism. Here is the Pizza Express where my partner and I went on our first date, here is the bus I rode to get there; here are the streets where we used to live. All these things feel vivid to me, because I’m preparing to take time away from London.

It was in the New York Times office that my colleague offered a book of poetry she thought I’d like. It was Loop of Jade by Sarah Howe. It seemed to open up wide, generous avenues of thought, which helped me with the thing I was writing, in the snatched hours, not taking myself seriously. A year later I interviewed Sarah for an online literary magazine. We met at the Quaker House on Euston Road. A few months later I asked if I could send her my manuscript, by way of gauging whether or not I should persevere. She said kind things about it in the Caffè Nero on Kingsway. Around the same time I got an agent. He liked it. He sent it to an editor at Granta. She liked it. I’m pleased to report it is out now. Titled Amnion, it’s about love and chosen family: about how for years in this country, and still, I’m asked where I’m from; it’s a question I can’t answer concisely – to do so wouldn’t do justice to my family history. It is a question I learnt, in Amnion, to reject, denouncing the very terms on which it was posited. I think it more worthwhile to ask what we come from, and who we come from. I come from my family, and from the friends with whom I have rolled into this great, mean, stinking city that shakes us down for change. Amnion is a love letter to all of them. The launch will be at the LRB shop. 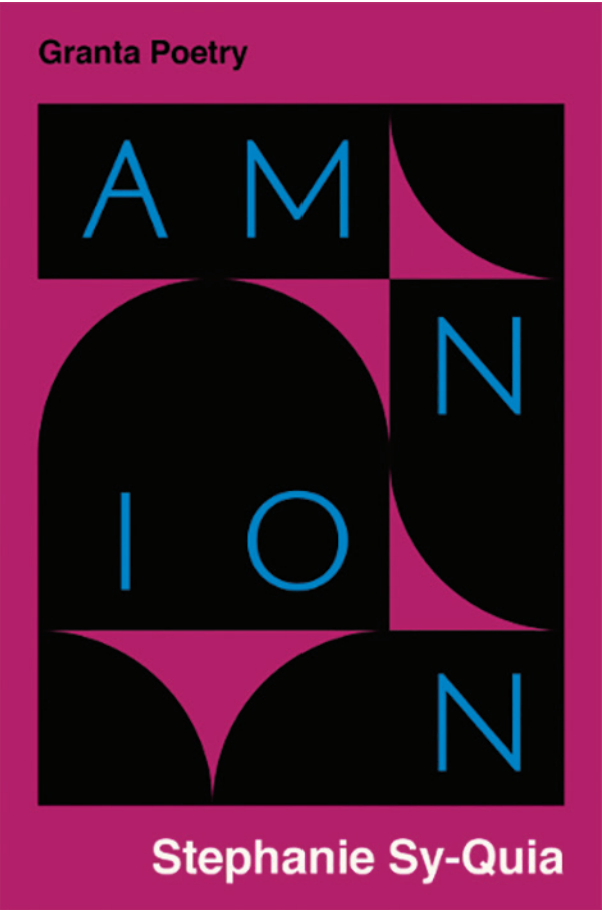 Stephanie Sy-Quia was born in Berkeley, CA, in 1995 and grew up near Paris. She is the host of forthcoming podcast “Eccentric Circles”, and her book “Amnion” is published this month by Granta Poetry (£9.99)