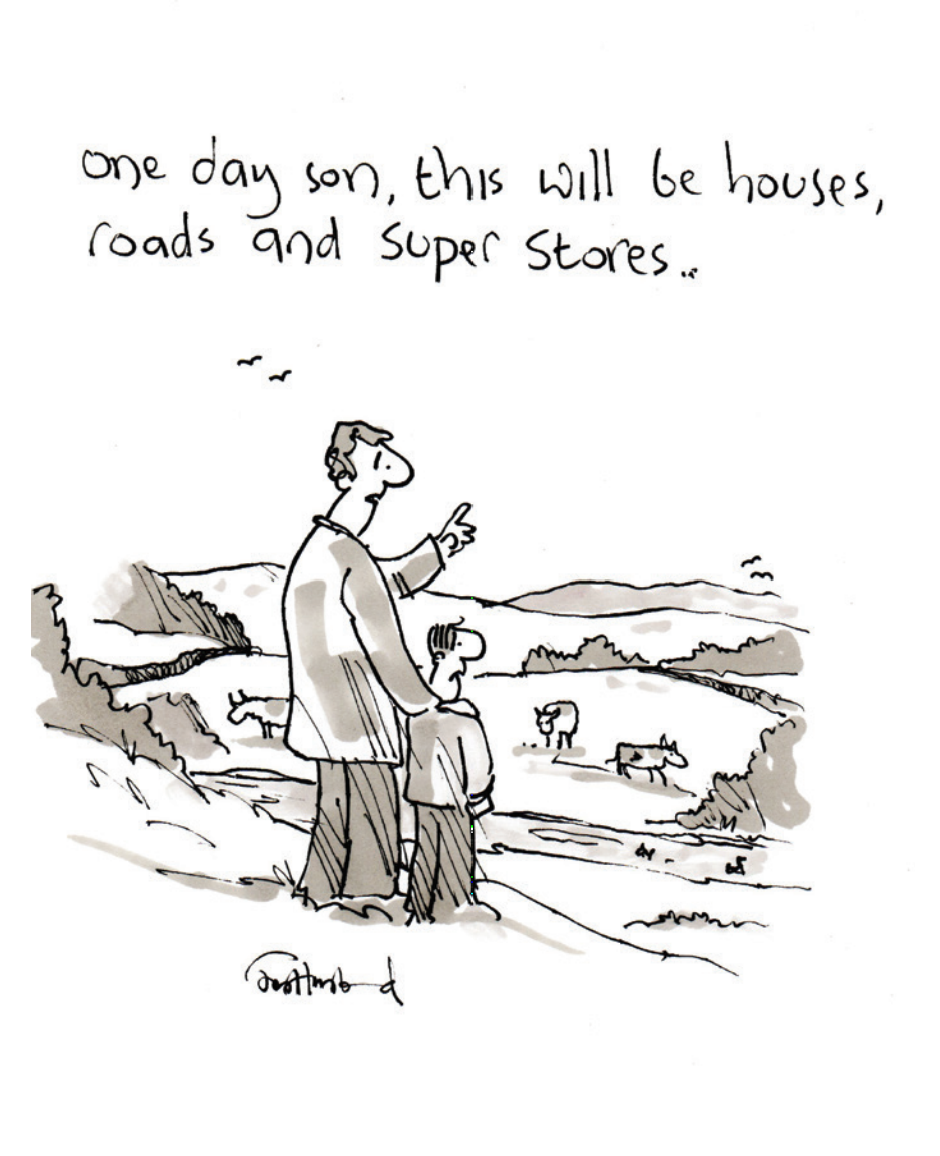 The title of Philip Larkin’s lament for the vanishing countryside, “Going, Going”, invites us to bang our auctioneer’s gavel and say “Gone!” His prophecy will then be complete, the countryside sold off, leaving us with just “concrete and tyres.” Larkin finished his poem with the blunt assessment it would all happen “soon.” That was in 1972. What would he make of the urban sprawl since then, or the proliferation of roads and their bumper-to-bumper traffic?

The devolved planning framework of 2012 was supposed to give more control to local communities but has actually – as many predicted – empowered developers. Vast tracts of the Green Belt have succumbed to development, and more will do so. From London to Manchester, from Stonehenge to the Wensum Valley, there continues a frenzy of construction. None of this is solving the housing crisis, which pivots on the lack of affordable and sustainable housing. What we do not need are the countless low-density mini-castles-with-a-view that any countrysider from Cornwall to Norfolk, from Kent to Cumbria, will tell you are being tacked onto their townships by the thousand.

It’s not just urban spread. Farming accounts for 70 per cent of land use but has changed dramatically since Larkin’s time. He would scarcely recognise his cherished “fields and farms”, or the scale of the machinery now deployed in them. Thousands of acres of farmland have been artificially surfaced over in the past decade alone. All this, before we consider mega-projects such as HS2, which for all the green-wash is a folly that will cause unprecedented ecological loss.

Of course, Larkin’s lament was far from original. Environmental vandalism was a key theme of Tolkien’s Lord of the Rings, where the Shire was a metaphor for rural England. Earlier still, in the early 1800s, the poet John Clare warned of the consequences of the acts of enclosure. These simultaneously brought about the countryside’s imprisonment – its physical and economic capture, resulting in its ongoing ecological impoverishment – and people’s exclusion from it, which, as Nick Hayes writes (p. 19), continues to psychologically impoverish us today.

Our urban fabric, our homes, public spaces, and even public houses, need to keep adapting for new communities and to new realities. But the thread with which we weave this fabric must be resolutely green, sustainable in every sense.

For the countryside is more than green spaces; it is the place where ecology and culture intersect; not just nature, but our access to it. For all our destructiveness, we remain as present in nature, as it is in us. Yes, the countryside is meadows, woodlands and streams, peatland, moorland and marsh; but it’s also village greens, village halls and village pubs. Clare’s own descent into “madness” embodied the consequences of human disassociation from the natural world that continues to gather pace today. Now we call it the mental health crisis.

This is not a call for the countryside to remain static, quite the opposite. We are a nation defined by invasion, immigration, and assimilation. Our urban fabric, our homes, public spaces, and even public houses (see Laura Thompson, p. 14), need to keep adapting for new communities and to new realities. But the thread with which we weave this fabric must be resolutely green, sustainable in every sense.

The pandemic has demonstrated two things, one scientific, the other political, both critical for the future of the countryside. Firstly, the virus resulted from our unnatural practices, reminding us that nature is the whole earth system and we mess with it at our peril. Secondly, people will accept transformational shifts in the way they live and work to protect their families’ future. The Government needs to take its direction from the first, and find its political will from the second.

There are positive signs that many within the Government, including the Prime Minister, understand this and genuinely desire a greener future. It’s hard to imagine an environmental campaigner as steadfast as Tony Juniper (see The Interview, p. 50) accepting his role at Natural England if he didn’t believe this to be the case. But fine slogans like “Build back green” are not enough. Our politicians need to ignore contrarian pressures from within their own parties and find the political courage to be unambiguous in their commitment to the countryside’s ecological integrity. They need to put their policies into action, starting with the much-delayed Environment Bill, which should have been the first piece of legislation passed in the post-EU era, and not side-lined as it has been. Maybe then, the Prime Minister will be able to host the Cop26 summit with confidence; maybe then, the Green Man (see John Mitchinson, p. 11) will be appeased.