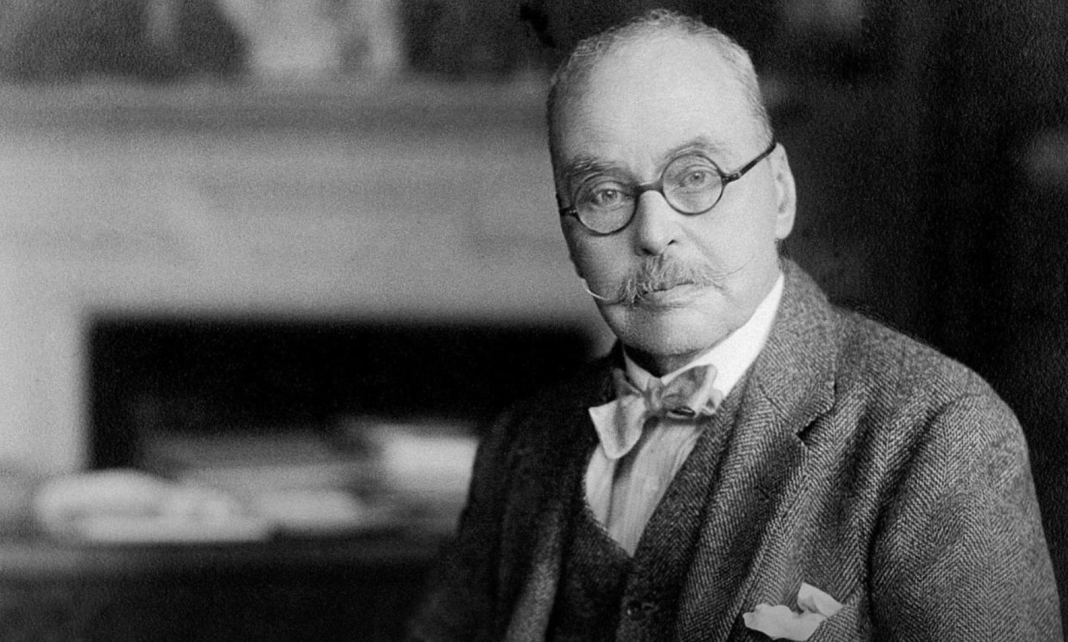 Born in India in 1857, Ronald Ross became Britain’s first Nobel Laureate, as well as the first recipient of that award to have been born outside Europe.  In 1897, he discovered that a parasite carried and transmitted by the female mosquito was responsible for malaria in humans, thereby paving the way for the combatting of that disease, and the saving of incalculable lives.

Ross made his discovery at Calcutta, the second capital of the British Empire.  This colonial city had grown exponentially on the marshy banks of the River Hooghly, but without much planning, or thought to sanitation.  April to November each year was marked by a surge in seemingly indiscriminate deaths from cholera and malaria, and, in the eighteenth century, a celebration became customary among survivors, who would gather together for the “Reunion” festival every fifteenth of November.  In fact, “two monsoons” was the life expectancy of new arrivals, and newly consecrated cemeteries were quickly filled up with young casualties to climate and disease; forty-five was considered old by Calcutta standards.

Jungle fever, as malaria was known, was marked by unique, recurring fevers that were both debilitating and deadly.  The settlement’s primitive thatched hospital treated the fevers with almost medieval methods: bloodletting, cupping, the application of leeches, and dosing with purgatives.  The gentler remedy of quinine had been introduced from the Americas by the Portuguese and, when available, this was taken with wine.  By the mid-nineteenth century, vast cinchona plantations had been established in India from seeds brought from the Andes, and quinine-infused tonic water began to be made and sold in London.

In much the same way as London villas sprang up in then suburban Kensington and Hampstead, and country houses emerged beyond industrialised cities, wealthy eighteenth century Europeans built “garden houses” to the south of Calcutta where, surrounded by acres of cleared jangal, they would weekend in clean air.  There they could also sit out any visitation that hung over the city, and isolate themselves from society.

Until the mid-nineteenth century, the idea pervaded that many diseases, including cholera and malaria, were caused by miasma, or foul air.  In fact, the term ‘malaria’ was adopted into English in the 1740s from the Italian mala aria, meaning ‘bad airs’.  Calcutta’s endemic, periodic outbreaks were blamed on foul smelling pollution from poor sanitation and its seasonally putrefying salt lakes.

Due to growing public complaint, the Calcutta Council purchased one such “very large commodious” garden house from a Swedish missionary, who they commissioned to add two further wings, and convert the elaborate neo-classical building to a hospital.  It cost the council four times more than any other building it had ever purchased, including one that it had bought to house an Indian nawaab, or ruler.  Today, this is the city’s primary research hospital and was where Ross made his discovery in 1897.

Louis Pasteur and John Snow had dispelled the “miasma theory” and helped replace it with the current medical paradigm that is known as “germ theory” – the idea that disease is caused by microscopic pathogens, or germs.  Ross’s discovery fell securely within the realms of modern science.  In fact, it was believed optimistically that plague, pandemic and endemic disease could be relegated to history.

Malaria has likely killed half of all people that ever lived and, despite Ross’s discovery of its cause some hundred years ago, malaria has yet to be eradicated.  Though eliminated in Europe in the 1970s, through a combination of environmental engineering, drug therapy, and insecticide spraying, malaria remains rampant in much of the world.  In 2018, some 288 million cases occurred worldwide, with 405,000 deaths.

Churchill’s quip that “the gin and tonic has saved more lives, and minds, than all the doctors in the Empire” certainly had some truth to it, and Sir Ronald Ross’s discovery has saved inordinate lives.  Yet the era of plague, pandemic and endemic disease is not behind us, as we have seen with Covid-19, and more tellingly with our inability to eradicate malaria.  Perhaps we are not as much within the modern era as we had hoped.

Around 1420, by means of a ‘peep-hole’ and mirror, the entrepreneurial Italian master-builder, Filippo Brunelleschi, demonstrated the principles of perspective view. Six centuries later, Perspective acts as both society’s peep-hole and mirror: a lens focused on the great issues of the moment whilst simultaneously surveying and reflecting our views on them. Our aim is not to so much to report, as to report back. This is what makes Perspective unique, and the reason that in 2020 we are the country’s fastest growing current affairs title.

About Us
MORE STORIES
History

The stiff upper-lip: Has it always been a British trait?

October 13, 2020 0
We use cookies to ensure that we give you the best experience on our website. If you continue to use this site we will assume that you are happy with it.Sure thing!No